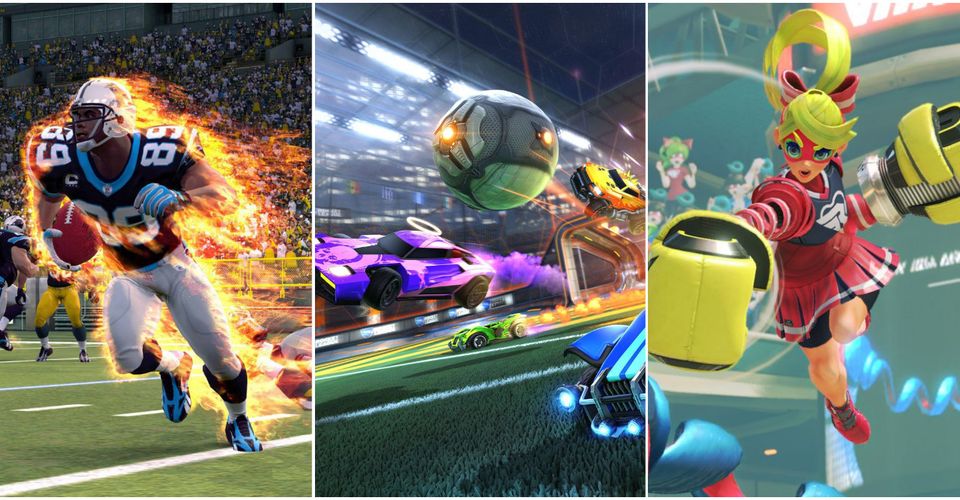 One common gaming stereotype is that it's antithetical to sports. Not so with these sports games!

It takes a special kind of sports game to appeal to players that aren't normally interested in sports. Some key features are accessibility, fast-paced gameplay, and simplification of many qualities of the sport in question. Features that exaggerate for the sake of spectacle or humor tend to be well-received additions.

In certain ways, sports games that manage to appeal to non-sports fans barely feel like sports games at all. Without all the usual technicalities in play, they can become more enjoyable when reduced to their essential aspects. It helps when the games have a bright and colorful aesthetic too.

Ever since way back in 1991 with NES Open Tournament Golf, Mario, his friends, and his enemies have enjoyed playing golf together. The Mario Golf series began with the original game on the Nintendo 64 in 1999. Its popularity has remained steady, with each new entry in the series offering something new for players.

Having a familiar cast of characters and simplified controls appeal to non-golfers. The games give players visual information about how far shots will go with each club, the trajectory and lay of the course, and the strength being put into each shot. Some Mario Golf games even have RPG-like elements, or special powerups, making play more unique and exciting.

Just because a game is old, doesn't make it bad. Ice Hockey for the NES is a good example of that concept. Its controls are fairly straightforward, its visuals are bright and colorful, and the music is catchy and memorable. The gameplay itself is simple, but very satisfying too. There's a sense of challenge to it, but it's the fun kind that makes most players want to keep trying.

All these aspects work out in its favor. Despite the game's age, it remains a very accessible experience. It's easy to pick up and play a few matches and walk away from it feeling satisfied, even decades after its creation.

NFL Blitz is a franchise that started in the late 1990s and early 2000s. It takes the usual rules of American Football and bends them into a fast-paced arcade experience. Player movement is very quick, and tackles have much more flourish and pack a punch. Often, the animations look like something from a wrestling match rather than actual football.

Players have a turbo gauge and can use it for temporary boosts of speed. Hits can be late, even very late, and there is no punishment. The commentary is loose and humorous. The playbook is reduced to just a handful of options for simplicity and speed. All of it combines to make a very exciting version of football that would not be safe in reality but works great for an accessible and fun video game.

Nintendo's Wave Race series of games is an excellent example of accessible controls in a racing game. Players proceed through a racecourse in a slalom-like fashion, with buoys placed throughout the course. Depending on the color of the buoy and using the large arrow signs as indicators, players either have to go around the left or the right side of each one. Missing buoys lowers overall watercraft speed and missing too many forces a restart of the race.

Wave Race 64 on the Nintendo 64 can be played with just one button to accelerate the watercraft and the control stick to steer. This simplicity in approach makes for a fantastic game that anyone can pick up and play.

6
Arms Is A Radical Mix Of Boxing And Fighting Games
Arms is a mix of 1 vs. 1 arena fighting games and boxing. Motion controls help bring some accessibility to the experience, but this isn't necessarily the simplest game to play. It is a wildly different approach to boxing, with each character having spring-like stretchable arms to use for their offensive moves.

Arms plays like a boxing game from opposite ends of a large arena rather than having to get up close and personal. Defense is possible as well with a guarding motion similar to how it would be done in traditional boxing. Add in the game's more fantastical elements like ninjas and mechs, and you have a unique and exciting take on the sport of boxing.

NBA Jam started out as an arcade game, and it shows. It has simplified controls, flashy dunks, and features like turbo boosts and powerups to make the game more exciting. If players make three shots in a row the announcer remarks: "He's on fire!" The ball changes to a smoking fireball and shots have an increased chance of making it in the basket.

In NBA Jam Tournament Edition especially, more powerups and fantastical elements were added to make the gameplay really stand out. Hot spots appear on courts, and if a player's character makes a shot while standing there, they get increased points. Powerups spread around the court can increase turbo gauge duration, shot accuracy, movement speed, and more.

The Wii Sports franchise brings accessibility through motion controls to a wide variety of different sports games. Being able to play just by moving one's arms to mimic the real sport adds a fresh new feel to the experience. Even people who never play video games or the sports in question may enjoy it.

While not all of the games are created equal, there are 5 offerings in the original Wii Sports game and a whopping 12 in its sequel, Wii Sports Resort. Chances are good even if players aren't fond of every one of them, there are probably one or two that they can enjoy playing repeatedly.

Another game series that started in the arcades, the Punch-Out!! franchise's most popular entry is on the NES.  The controls are fairly simple, though precise timing with button presses is required to make progress. The bright and colorful visuals and memorable characters add charm to the experience.

Punch-Out!! on Wii is a revamp of the series, harkening back to the NES era. It adds motion controls, even supporting the Wii Balance Board accessory in addition to the Wii Remote + Nunchuck controller setup. For players who prefer something more traditional, NES-style controls are also an option using the Wii Remote turned sideways. The variety of control options make the experience approachable for many.

Back in the late 1990s and early 2000s, the Tony Hawk's Pro Skater series of games were at the height of its popularity. Many players who have never even considered the sport of skateboarding took interest in the games. Backed by a then-contemporary soundtrack, its trick-chaining gameplay often resonates with players.

A recent modern remake introduces the skateboarding games to a whole new generation of gamers. Players can easily perform tricks that would be risky or downright dangerous in real life. The controls take some getting used to, but they follow similar patterns using the different face buttons, so it becomes second nature after acclimating to them.

1
Rocket League Is A Fantastic Blend Of Racing And Soccer

Rocket League mixes two completely unrelated sports genres: racing and soccer. It sounds bizarre, but it's a fantastic experience. Players take control of a vehicle on a team and drive around a huge soccer field. The goal is to bash their car into the giant ball and knock it into the opposing team's net, just like with soccer.

The racing controls are approachable and easy to pick up. Games can be played against computer opponents or real people, and there are rankings leaderboards and tournaments for those who enjoy competition. There are even other game modes to play that mimic different sports, like basketball and ice hockey.

- England lock horns with Italy in the final of Euro 2020 on Sunday evening at Wembley, with the Three Lions’ young attacking talents looking