Mauricio Pochettino: Paris Saint-Germain boss in talks with Tottenham over return to club 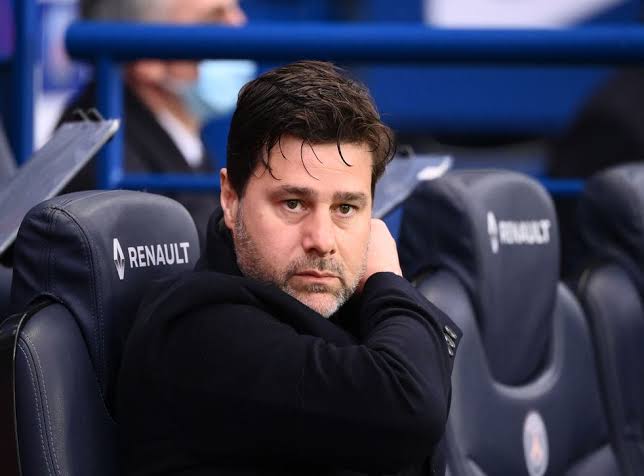 Mauricio Pochettino was sacked by Spurs in November 2019; he won the French Super Cup and Coupe de France with PSG after taking over at the Parc des Princes in January but failed to deliver the Ligue 1 title

Mauricio Pochettino is in talks with Tottenham over a sensational return to the club after less than six months in charge of Paris Saint-Germain.

Spurs chairman Daniel Levy wants the Argentine back after reportedly acknowledging he made a mistake to sack him and replace him with Jose Mourinho in 2019.
The club's strategy after sacking Mourinho earlier this year is now to get Pochettino, who is said to be unsettled in the French capital, back at Hotspur Way and hope it can help persuade Harry Kane to end his pursuit to the exit.

Talks are underway but it is far from a done deal, with PSG reportedly keen to keep him despite missing out on the Ligue 1 title this season. He did win the Coupe de France and French Super Cup.

Pochettino also has a year left on his PSG deal plus an option for another - but his family are said to have remained resident in Greater London and his son Maurizio plays for Watford, having joined them from Spurs in January.

His reappointment would go a long way to appeasing disgruntled Tottenham fans who have seen their club take a nosedive since Pochettino's heyday, especially this season; finishing seventh.

Spurs have been making a detailed appraisal of their situation since Ryan Mason took temporary charge and oversaw the final few games of the season, including defeat in the Carabao Cup final to City.

Despite being in talks over a return, Pochettino was quoted on PSG's website on Thursday discussing future plans at the Parc des Princes.

"With this way of working, and with the desire to be able to develop other kinds of ideas on the pitch, it will be possible to do great things in the future," he said.

"I think that in football you are never satisfied because perfection doesn't exist. But we are always looking for that satisfaction that we can't find, because I always believe that football challenges you every day and that from season to season you have to be better and better."

Pochettino also said he and his players had missed playing in front of supporters, adding: "This is something that hopefully will be solved soon and we will be able to have this strength again and, with our fans, create this bond that makes the team better and will help us to achieve the goals that we have set."

Pochettino also oversaw Premier League title challenges in 2015-16 and 2016-17, although Spurs were overpowered by Leicester and Chelsea on those occasions.

Were Pochettino to depart PSG, he would leave them searching for their third head coach in less than a year.

Pochettino joined the club as a replacement for Thomas Tuchel, who was sacked in December 2020 despite leading them to their first Champions League final just months earlier.

How have Spurs got to this point?

"This is a sensational story that was first reported by Charlie Wyatt in The Sun a couple of days ago and it's absolutely true. Spurs are in talks with Pochettino, who was sacked 18 months ago by Daniel Levy, who now accepts that was a mistake. Since January, he's been head coach at PSG where he also used to be a player but I don't think he's totally settled in Paris.

"I think he would be open to the option of returning to Spurs. He's got one year left on his PSG contract. He did win the French Cup with them a couple of weeks ago, but they missed out on winning the French title. If you're the PSG manager, you're really expected to win the title every season, and they were also knocked out of the Champions League by Manchester City.

"This is an appointment that would be very popular with Spurs fans and every fan I know wants Mauricio Pochettino back. There's a real connection between him and the club. He understands Spurs and supporters treat him as if he was one of their own. When he was at the club, he managed in very difficult circumstances without the transfer budget some of his rivals had.

"Spurs weren't paying the kind of wages his rivals had while they were building and moving into a new stadium. Throughout all that, he kept everything ticking over by qualifying for the Champions League, reaching the final two years ago. Levy would like him back and I sense Pochettino would like to come back but it'll be difficult as he has a contract at PSG while Spurs do have other candidates for the job.

"The noise coming out of Tottenham is that they want to appoint a new manager in the next 10 days, and Pochettino is definitely one of the leading candidates."

Merson: Poch would be welcomed back with open arms
Sky Sports' Paul Merson:

"Pochettino returning to Spurs really wouldn't surprise me. People always say don't go back but you look at the situation at Tottenham and he'd be welcomed back with open arms. Dele Alli would certainly welcome him back and there will be plenty of other players too.

"Let's be honest, there's not a lot around at the moment. I know Zinedine Zidane and Antonio Conte are out of work, but if Kane goes, they are not going to want that job. I know people say I'm ex-Arsenal and that's why I'm saying it, but for me, the reality is that the Spurs job without Kane is a bit of a shocker. You are taking away someone so influential who will probably go for around £100m, but who is probably worth £200m to Spurs.

"If Kane goes, I can see Heung-Min Son wanting to leave, Hugo Lloris will want to go and before you know it there's a mutiny there. They finished nowhere last season despite Kane winning the Golden Boot, so where are they going to finish next season? They will do well to finish in the top half, in my opinion.

"Why would Pochettino want to go back? If Harry Kane is sold, I think that would buy Pochettino time and maybe that's what appeals to him.

"The question Spurs fans will want to know the answer to is whether he can convince Kane to change his mind and stay at the club, but I'm not so sure. He has said he wants to win things and no disrespect, Pochettino didn't win things in his first stint there and they were a better team.

"Spurs are a long way away from challenging at the moment. If they finished in the top four next season you'd want whoever was the manager to be knighted. How do they finish above Man City, Liverpool and Chelsea? Not including Kane, how many of their players get into those teams?

"I will say this, Spurs is a great club. It's a class club and with the stadium they've got great facilities. It's a really nice place, but there is nobody queuing up to take the top job at all. It's a very difficult job and it will be interesting to see what happens if Poch goes back."

Tottenham legend Jurgen Klinsmann has spoken exclusively to Sky Sports News about entertaining possible calls for help from Levy, his sympathy with Kane over his Spurs future and England's chances at this summer's European Championships.

Klinsmann, who has been out of football management since leaving Hertha Berlin in February last year, revealed he would "always consider" an offer to return to Tottenham, where he scored 29 Premier League goals in over 50 appearances during two spells.

"Definitely you'd entertain it, no doubt," said Klinsmann about the possibility of returning to Tottenham. "He [Daniel Levy] has my number, he can call me anytime. Spurs is something that you'd always consider.

"I'm always in touch and doing stuff with Spurs is always something special. I had the best time of my life there during my two spells.

"In the football world, things happen so fast. I never thought I'd coach Germany or the United States so you have to have an open mind. You have to always think about new challenges, so why not Spurs?"